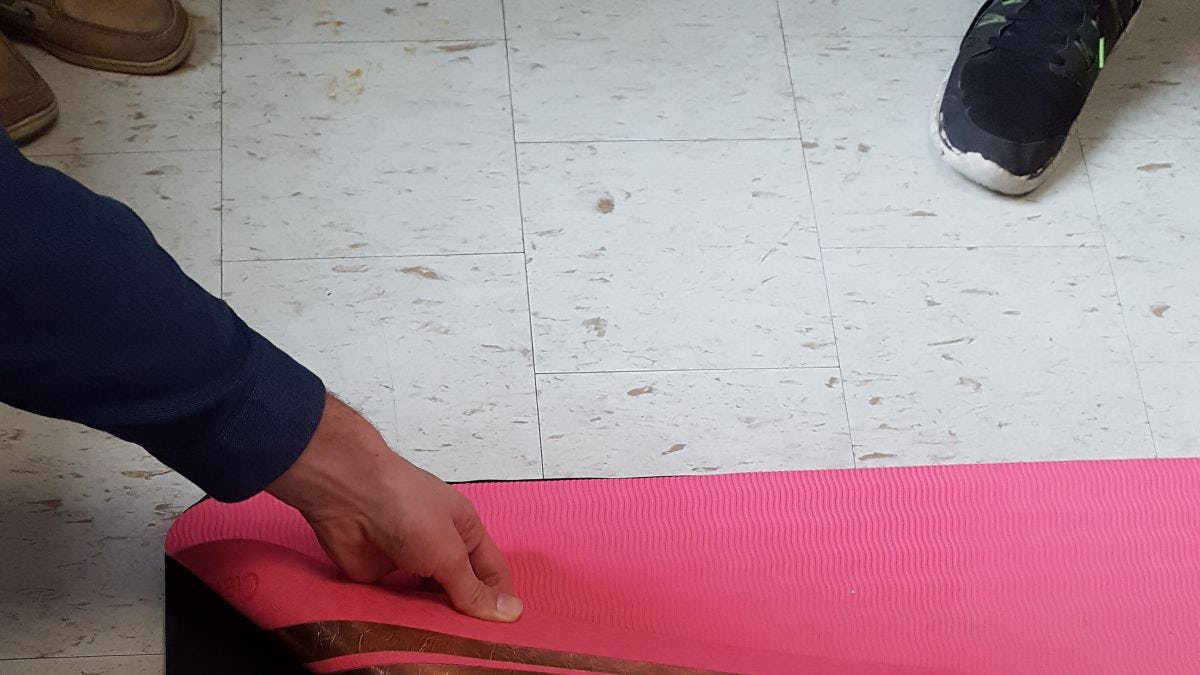 The circuitry behind Meet Matt.

For many people, working out at home is convenient and affordable. But it’s hard to know if you're doing a move correctly when you’re the only person in the room.

Fortunately, a group of Stevens senior design students has made great strides toward solving this dilemma by designing a prototype, pressure-sensitive intelligent fitness mat. Called “Meet Matt,” the project will be demoed at Stevens Institute of Technology’s Annual Innovation Expo on May 3.

The team hopes that Meet Matt will not only be able to identify and monitor movements but also offer personalized workouts, motivation, form correction and progress tracking. Essentially, Meet Matt would take the guesswork out of home workouts—and maybe even make them easier.

“The original idea was to take a workout video to the next level,” Vitkus explained. “Video doesn’t provide feedback. The [trainer’s] going to say “Good job!” every two minutes whether you do the exercise or not. The motivation to do exercises right is minimal. Our goal was to improve someone’s at-home workout regimen without having to invest in personal training.”

Once the team decided on the goal, they figured out first steps. “None of us had any idea how to build this. We started with a lot of research, seeing what was available,” said Praul. “The core of the issue is that the mat needed to be flexible and circuits can’t be flexible. Plus, most of the flexible options don’t work well.”

“We tried using a lot of conductive materials to build sensors,” Carpenter added. “We ordered conductive thread, ink pens, fabric, spray paint,” Vitkus listed. “There was a lot of trial and error with material selection,” Vaughan summarized. Ultimately they settled on Velostat, a flexible material they could use to create their own pressure sensors.

The team’s next challenge was determining how to wire electricity into the mat. They quickly realized the cost of pressure-sensitive cells needed for the mat was prohibitive, so they decided to build the hardware themselves.

“If we were to go into manufacturing, printing would be the best option,” explained Vaughan. “But not for prototyping it.”

After testing different possibilities, the team settled on conductive tape, which was both flexible and sturdy. Using the tape, the students created a grid that lies directly on top of the Velostat. Then wires needed to be soldered onto that grid. Carefully.

“It was not an easy task,” Praul said, describing the soldering process. “Luckily, we’ve got our master solderer in Ayer.” “I spent days soldering that mat,” Ciobotaru admitted. “And he only missed one wire!” Praul interjected. “I forgot one wire to ground,” Ciobotaru explained, “but it worked on the first try! I was super surprised.”

Semiconductors were used to route signals to the team’s Arduino microcontroller board, allowing them to interface with the material. Using multiplexers and shift registers, the team was able to cycle through rows and columns of the mat, read each individually and send the data via USB cable to a laptop. 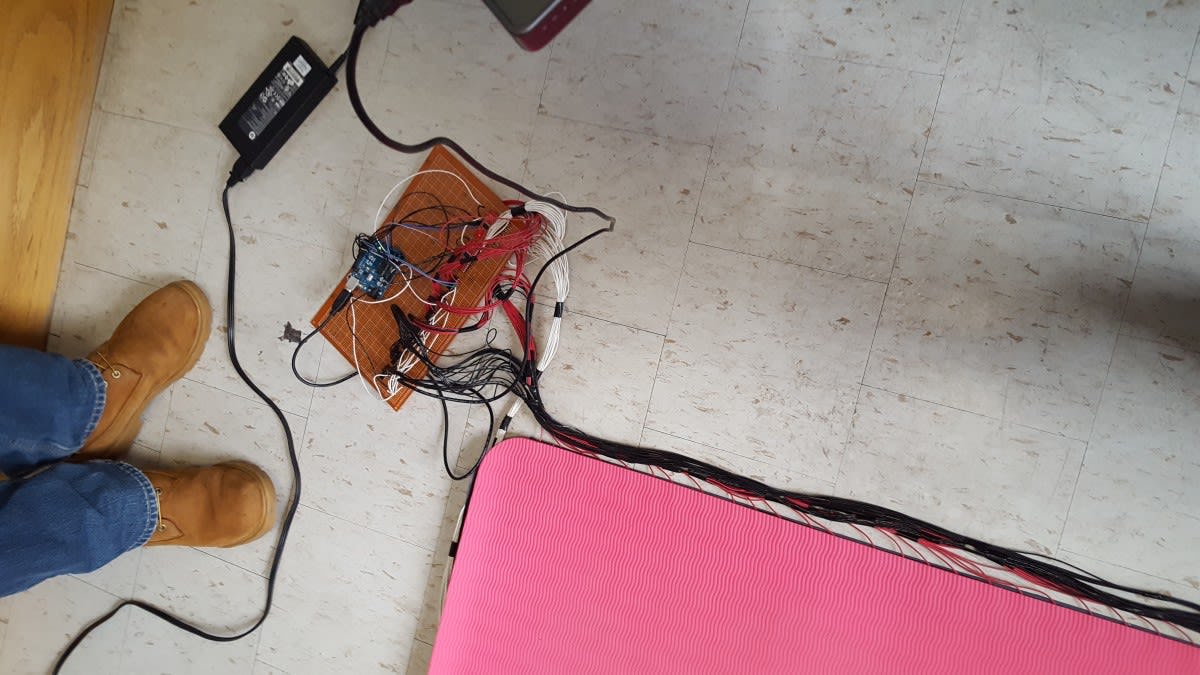 “We’ve taken a lot of circuit courses while we’ve been here at Stevens,” Praul said. “With the knowledge we had from those courses, we were able to assume how we would build the circuit and then, later, test it. Once we tested it, we were able to find out that we were right. We were able to apply our knowledge.” All of that work adds up to a functional, fully-wired prototype fitness mat.

Commercial Potential, Thanks to Teamwork

In its current version, Meet Matt’s software can recognize the pressure of a few exercise movements, like planks and push-ups. The team is now working on the next stage: identifying exactly what a user is doing on the mat and refining the software to guide them during workouts.

Regardless of how much further the product develops or whether it becomes a viable product, the team thinks the overall senior design experience has served them well.

“It’s gone beyond our initial expectations in a lot of ways,” said Carpenter. “It was a huge project just to get to this point. But now that we have the pressure data available, the applications are truly exciting.”

“If you have good people, you can get a lot done,” Vitkus said. “We knew we had a unique range of skills. All of those skills came together really nicely.”

“We’ve learned how to build something, how to work as a team, which is part of what Stevens has been preparing us for,” said Praul. 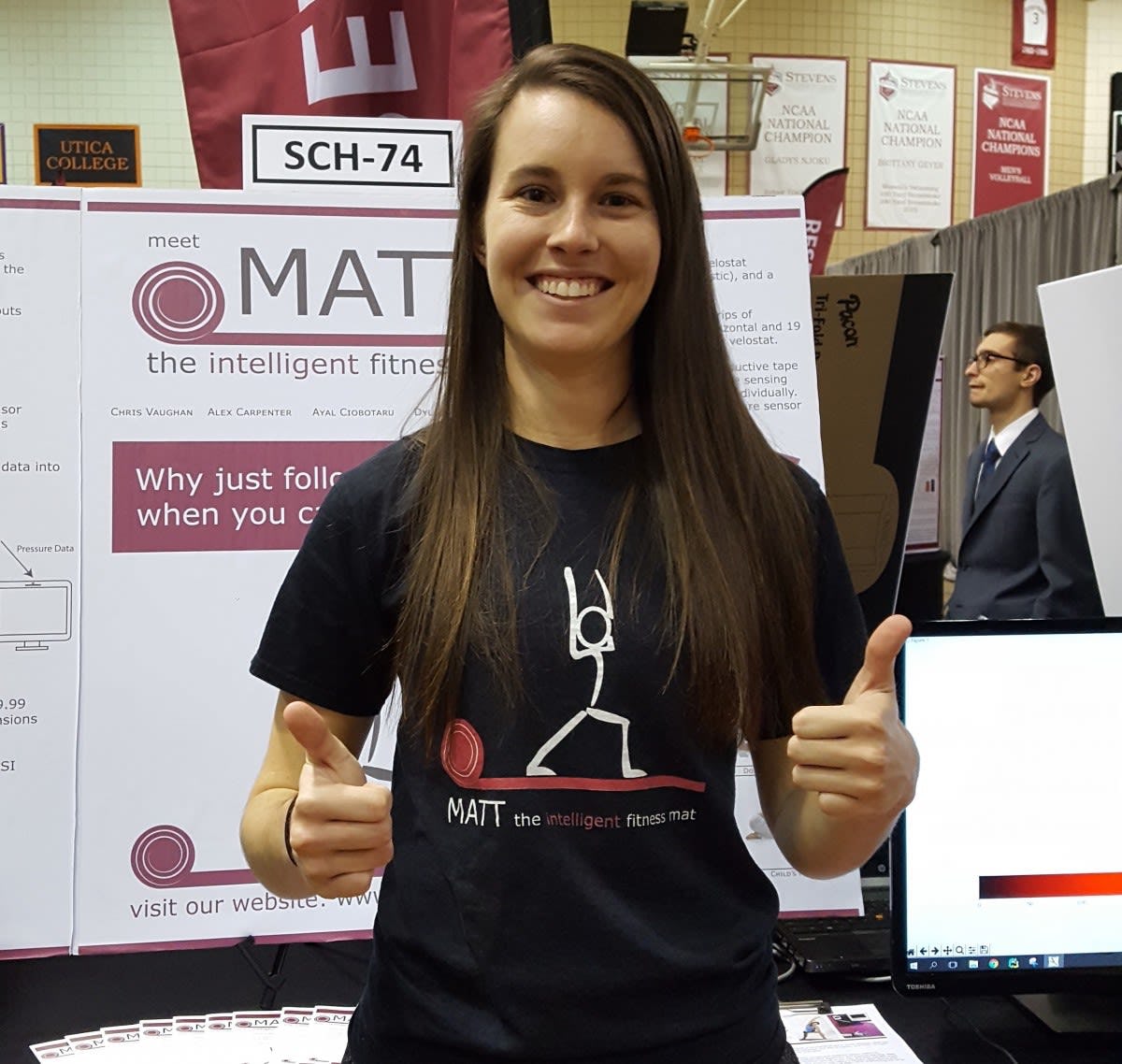