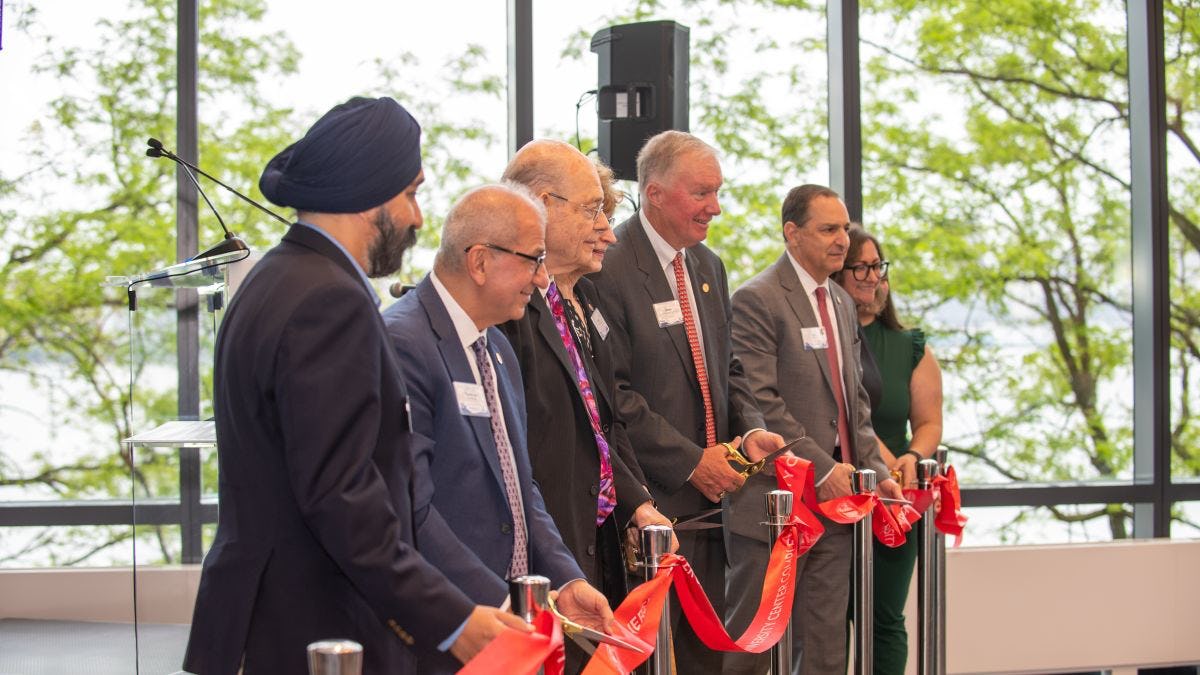 With music, speeches, tours, fireworks and fanfare, the Stevens community gathered May 14 to celebrate the official opening of the transformative new University Center Complex atop Castle Point as well as the recent conclusion of the $200 million The Power of Stevens campaign — the largest in Stevens history. 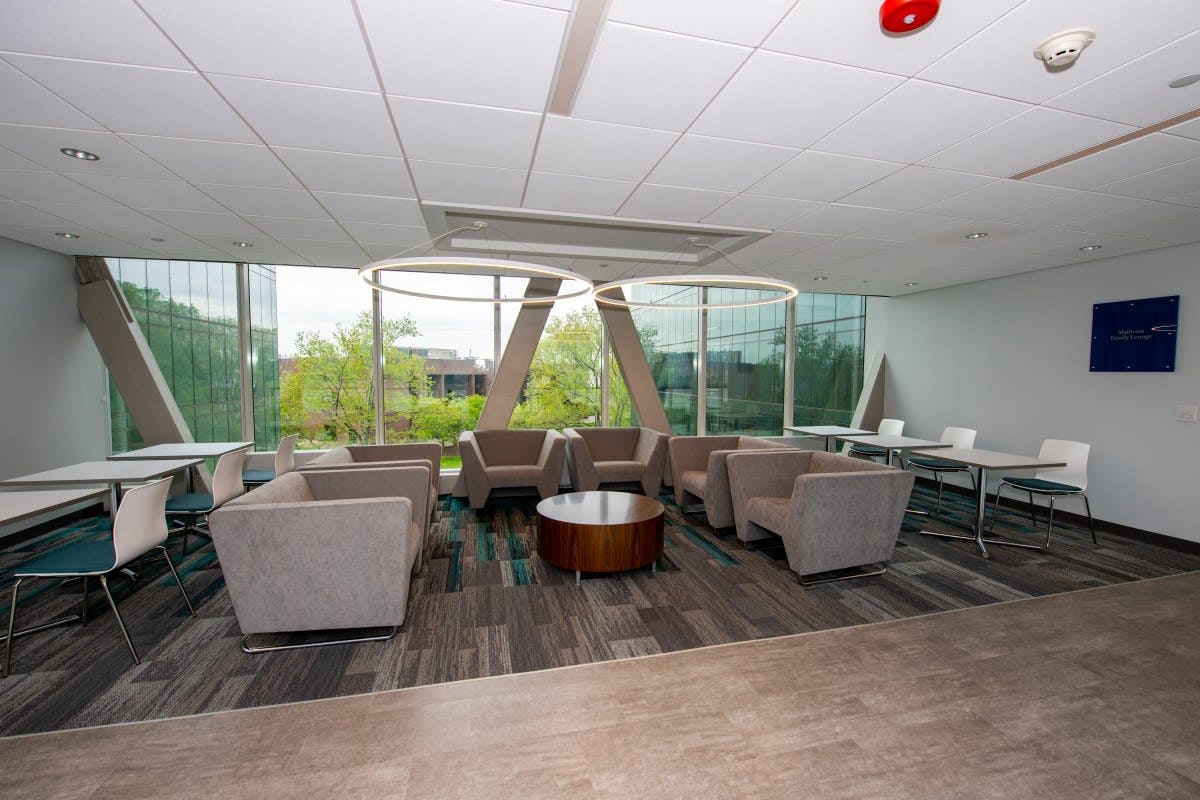 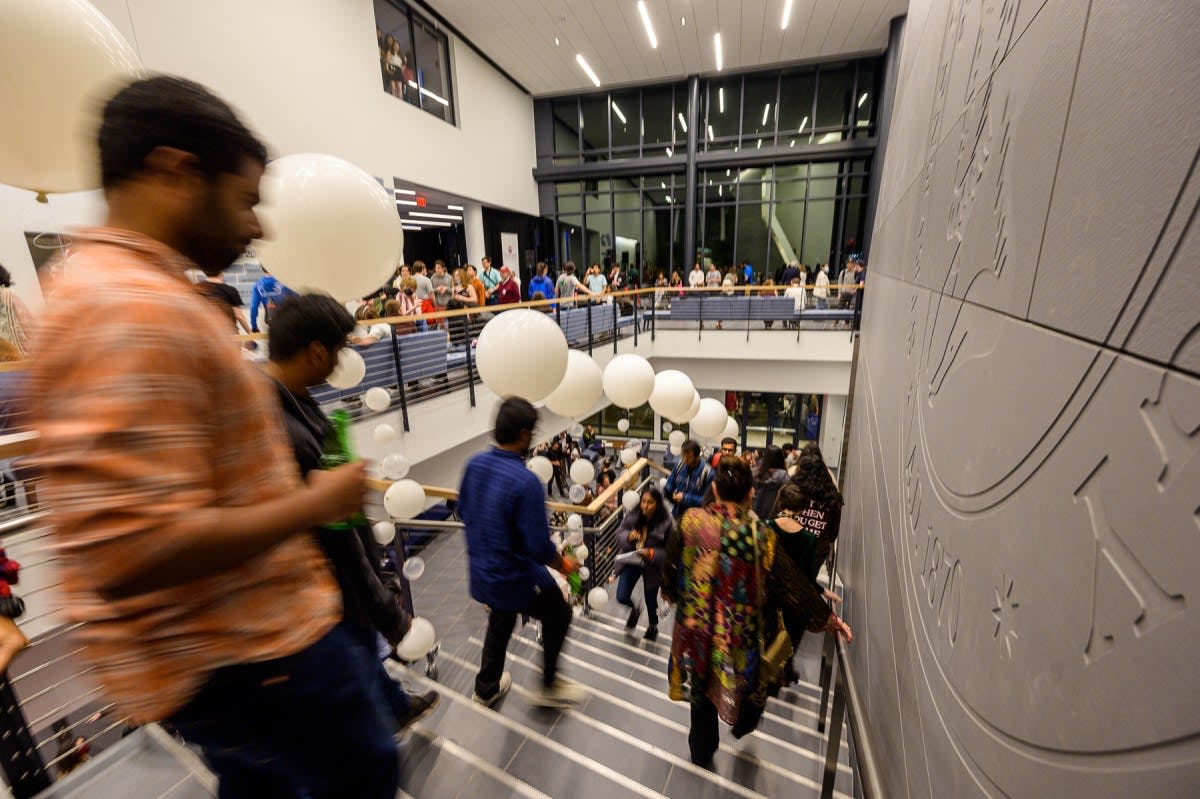 Speakers focused on the tremendous impact the new facility will have on current and future Stevens students.

"Never before have we had facilities of this scale and scope," said Laura Rose, Stevens Vice President for Development and Alumni Engagement, introducing the official complex ribbon-cutting event in the new complex's Grand Commons. "The residences and university center will bring even more vitality to the center of campus."

Stevens President Nariman Farvardin remarked upon the opening as confirmation of the university's strategic growth and rising profile as a premier technology institution of higher learning.

"This building," noted President Farvardin, "is an unmistakable symbol of the tremendous progress Stevens has made in the last decade." 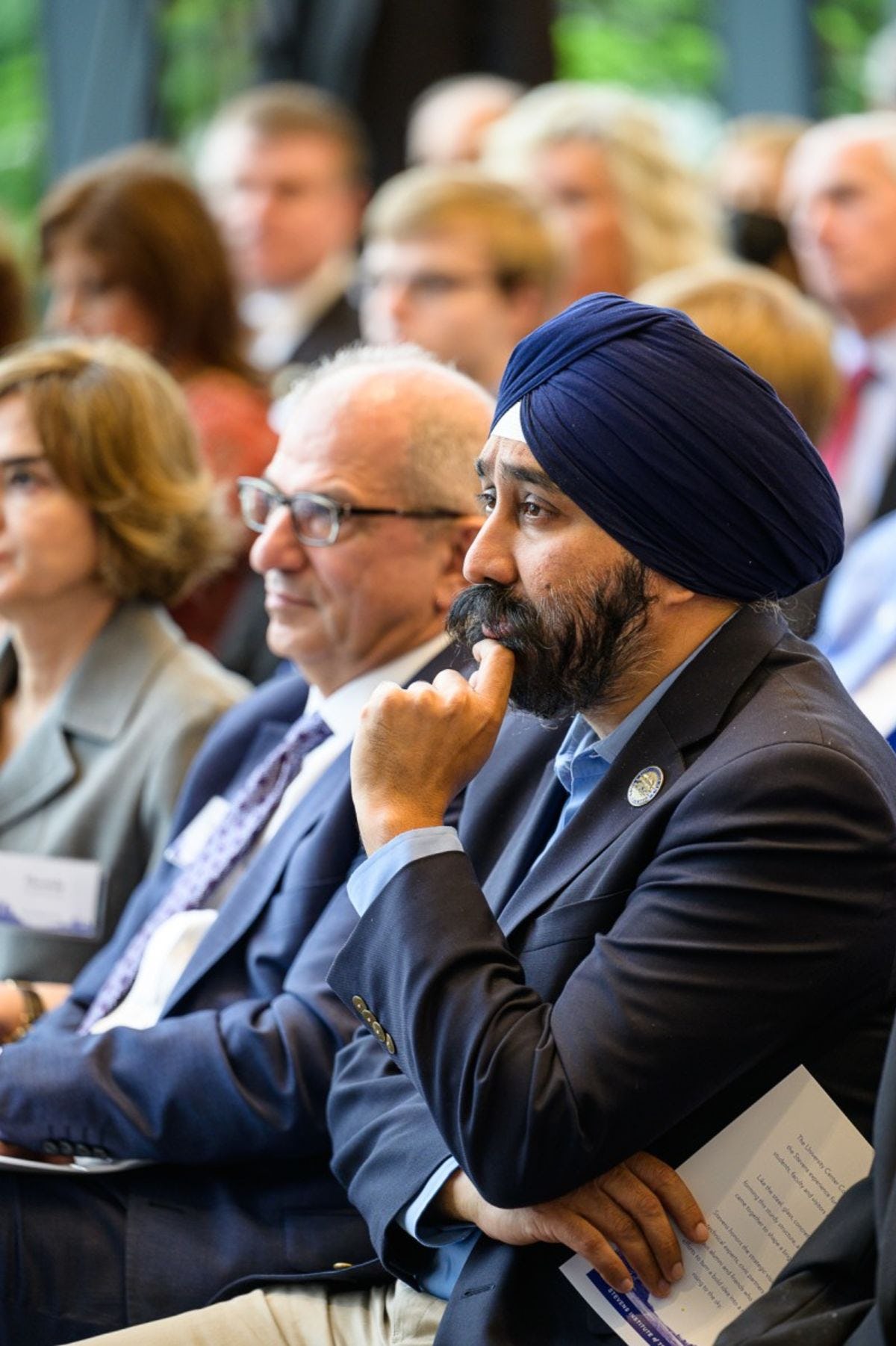 The President thanked university leadership and their respective teams for their hard work in realizing the complex. He expressed appreciation to donors, alumni and other supporters, many of whom are recognized on a donor wall in the concourse where the celebration took place as well as on placards throughout the complex. The president gave a special nod to Richard Harries '58 and his wife, Carol, whose donation to the complex is Stevens’ largest-ever single gift. The Carol J. and Richard F. Harries Residential Tower is named in their honor. 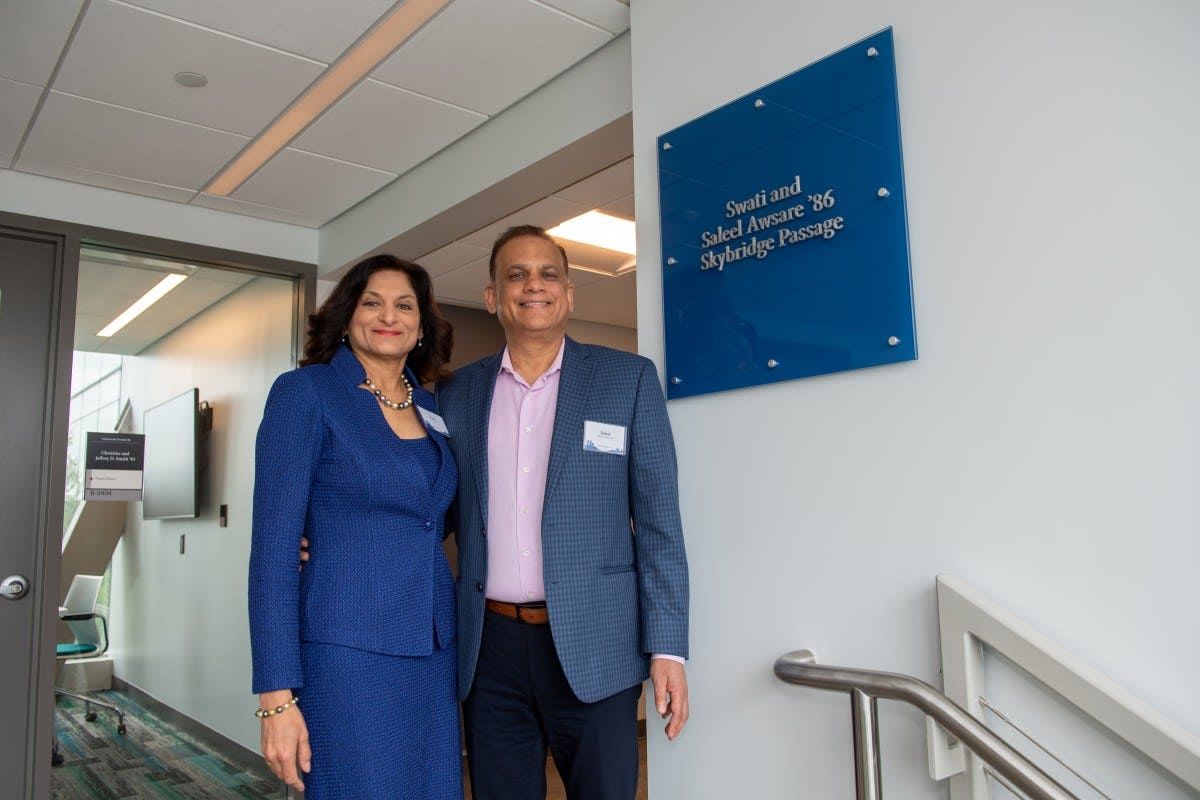 President Farvardin also extended gratitude to members of the Hoboken community; the Hoboken City Council (several of whom attended) and Planning Board; the Hudson County Commission; General Assembly and State Senate representatives; and Hoboken city officials, including Mayor Ravi Bhalla, who was also in attendance.

"We are standing on what is now the crown jewel of the city of Hoboken," said Mayor Bhalla. 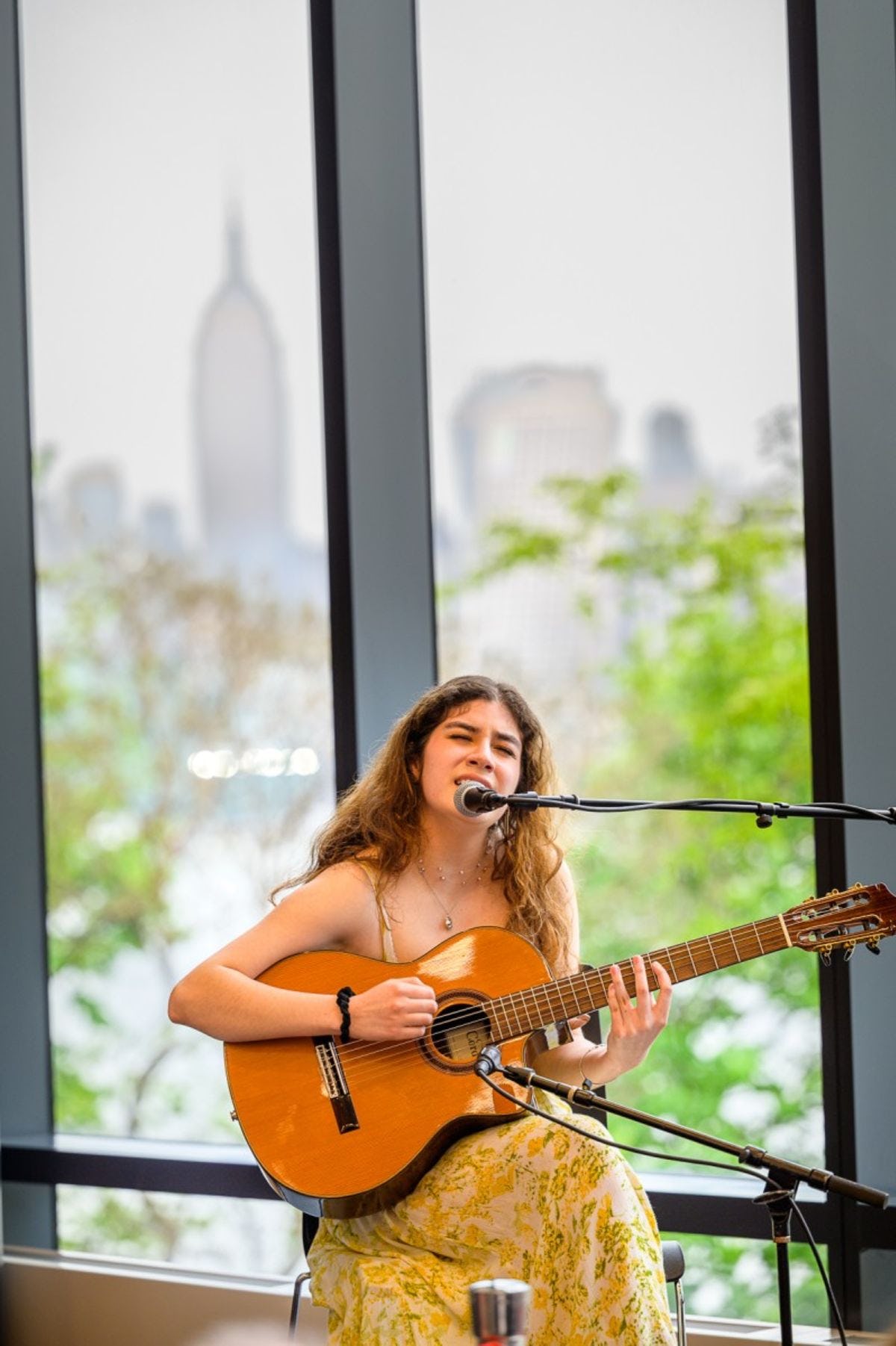 "Within these walls, we will foster a renewed feeling of community at Stevens," said Klein. "The space will facilitate the unplanned interactions and the random connections that lead to relationships, involvement and all the things that collectively keep our community healthy and happy." 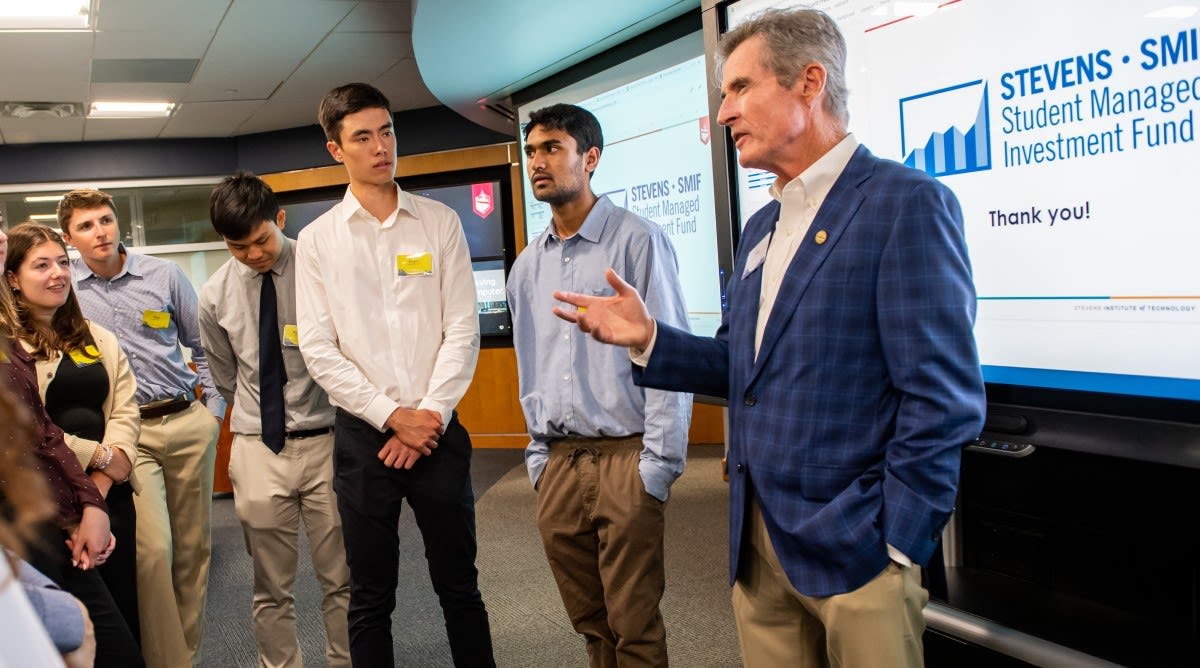 She emphasized how the design of the facility was continually informed by student input, including student-friendly features such as recreation spaces, historical photography, a new Museum of (miniature) Ducks, a café and numerous spaces with breathtaking views.

"The thought and attention that went into each aspect shows our students how much we care about them and their experience," noted Klein. 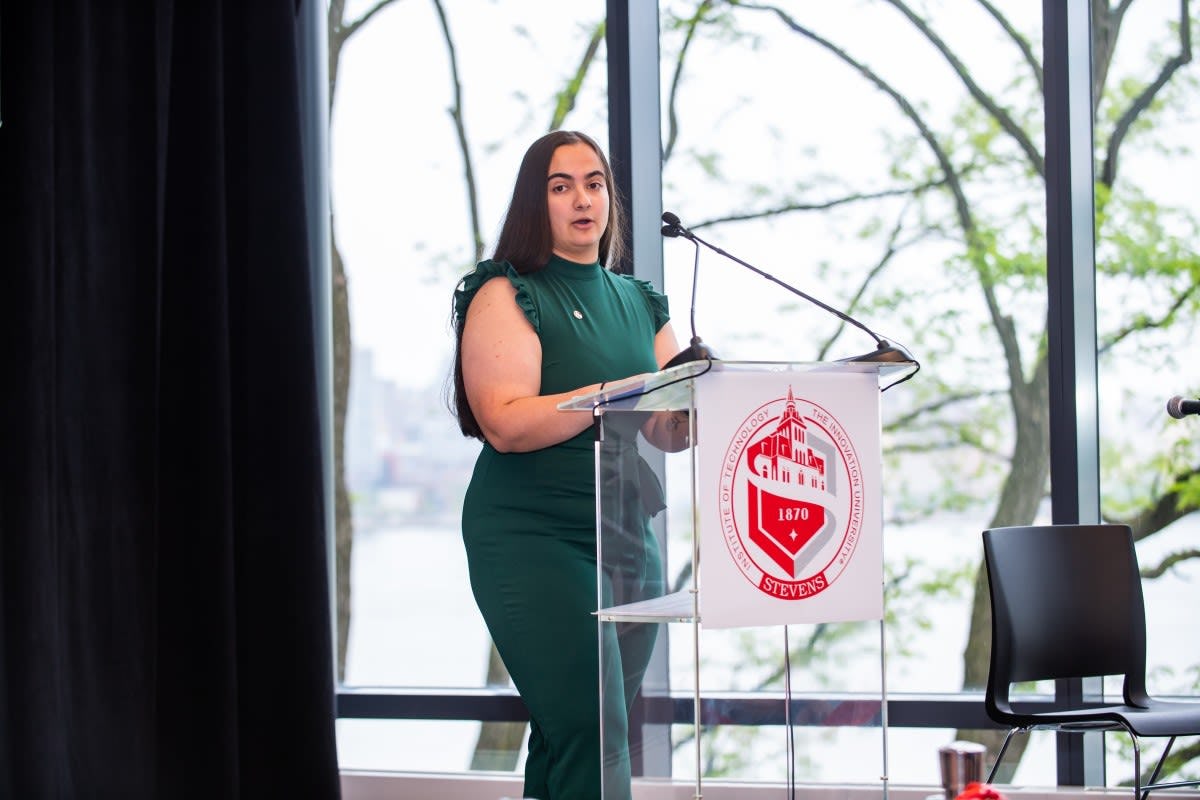 Gab Poska '23, a biomedical engineering major and president of Stevens' Student Government Association, also discussed the value of the new facility to students from her unique perspective as an undergraduate.

"There is so much excitement surrounding these buildings," Poska said, noting that student organizations such as the Stevens Dramatic Society are already planning events in the complex's spaces. "It is a place that I truly envision becoming everyone’s favorite part of our campus." 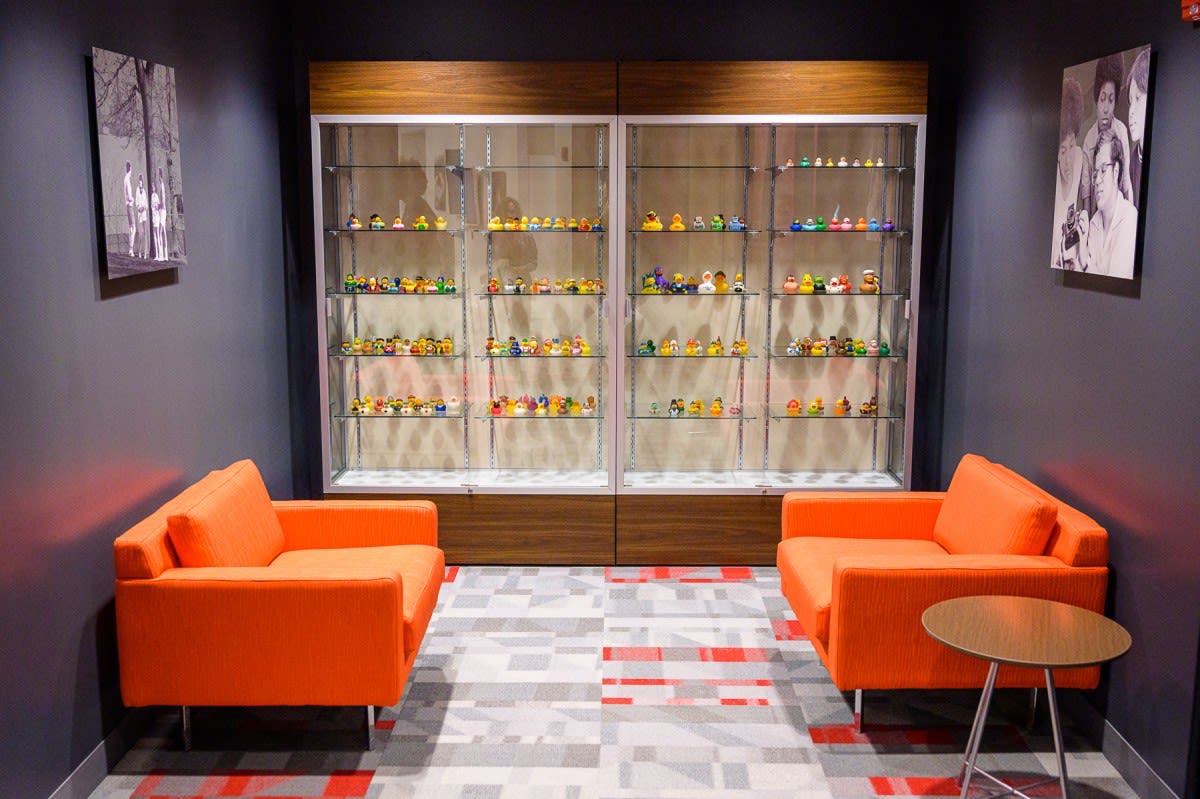 "I am extremely excited to take prospective students and their families on tours through this complex, where they will most accurately experience what it's like to be a Stevens student for a day: surrounded by the support of others — and of course the city just over your shoulder."

"Congratulations to President Nariman Farvardin and the entire community of Stevens Institute of Technology on opening your state-of-the-art University Center Complex, a magnificent symbol of ten years of remarkable progress," said Murphy. "Our state is stronger because of Stevens. The university fuels New Jersey's innovation economy, not only through the technological innovation that attracts new businesses to our state but also by graduating tomorrow's STEM leaders, many of whom live and work in our state.

"I celebrate your success and look forward to what's to come."

The focus next moved to the Babbio Center, Gateway Academic Center and Walker Gymnasium, where President Farvardin — along with The Power of Stevens campaign co-chairs Lawrence T. Babbio '66 Hon. D.Eng. '01 and Sean Hanlon '80 — introduced attendees to an "Impact Showcase" spanning the venues that celebrated the successful 2021 conclusion of The Power of Stevens campaign.

"In 2016, we announced our goal to complete the original $150 million campaign," said President Farvardin. "Six years later, despite a global pandemic and many challenges along the way, we are celebrating the success of an even more ambitious campaign that was supported by more than 14,000 donors who made more than 45,000 distinct gifts to the campaign." 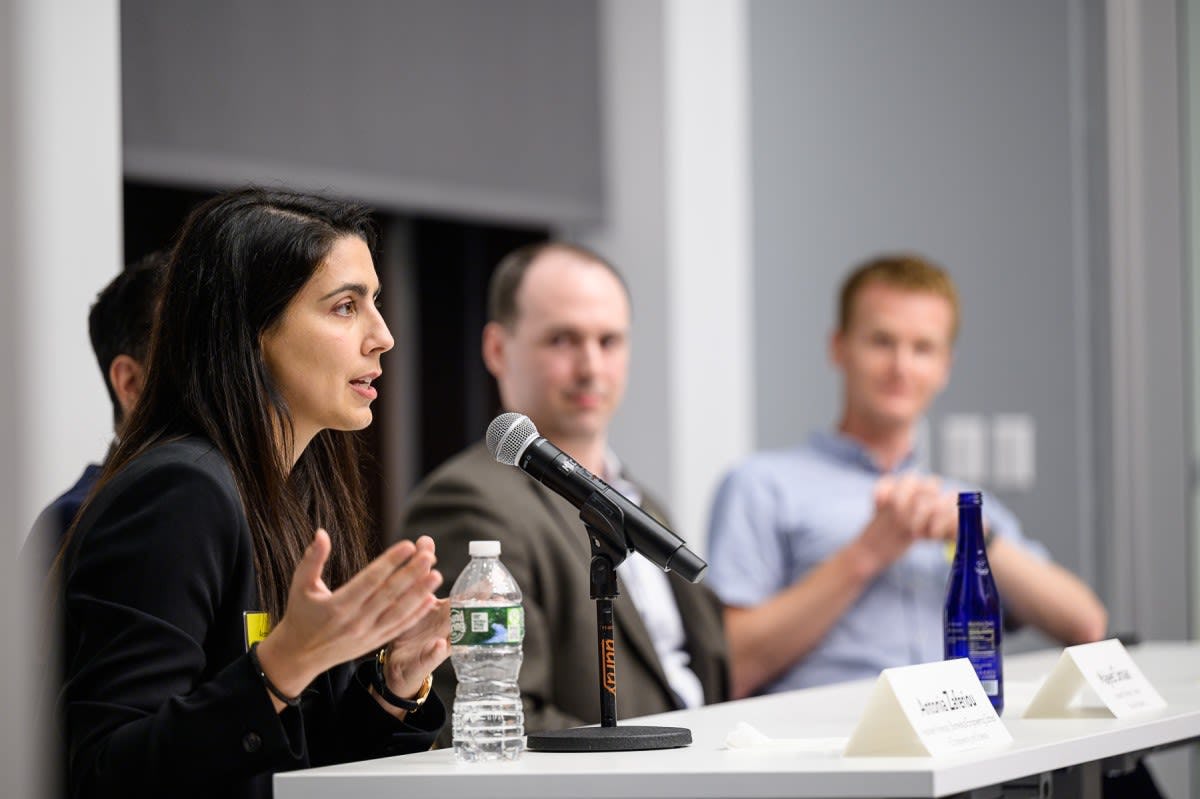 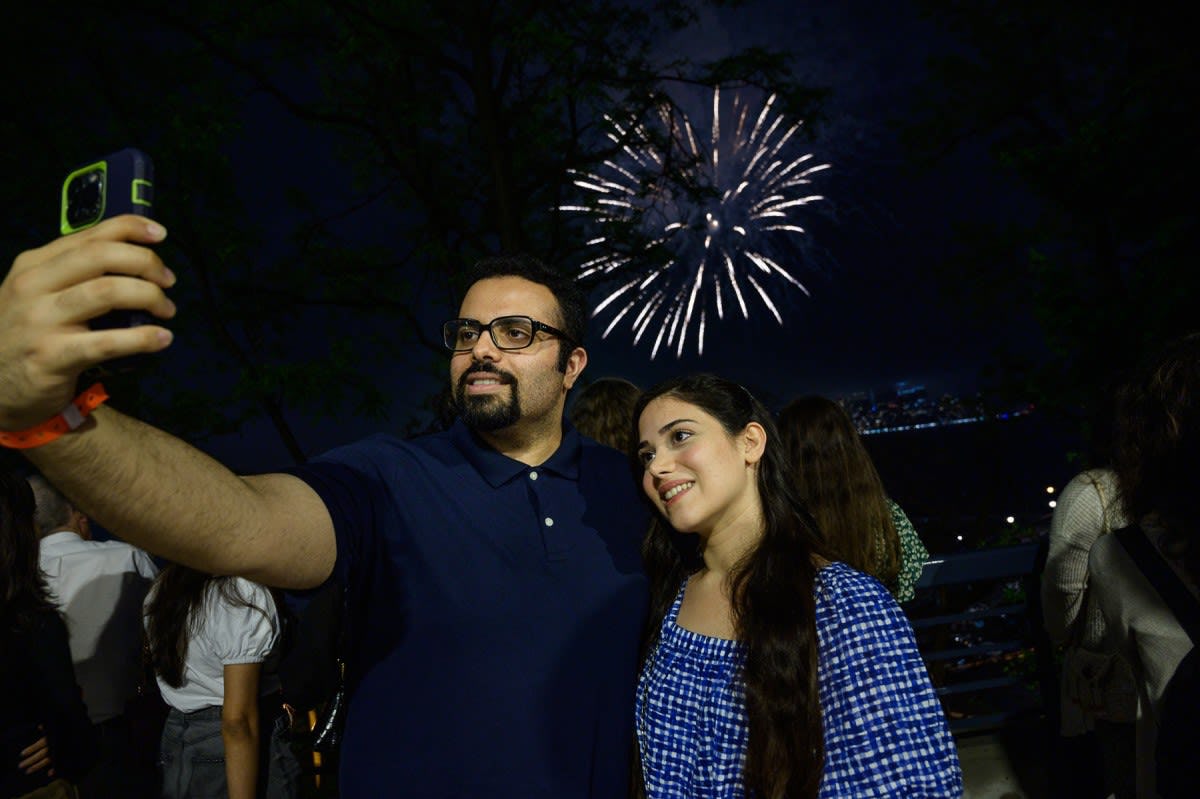 Tours of the University Center portion took in the new dining facilities, fitness center and donor wall, plenty of artwork — and an extremely popular game room.

President Farvardin concluded the event in the Grand Commons, directing attendees to spectacular fireworks over the Hudson River.

"It is because of you that Stevens is a university on the rise," the President summarized. "You can see it in our soaring admissions numbers, in the rising profile of our students, in the impressive credentials and growing research impact of our faculty, and in the magnificent new facilities that have been created on campus

"It is because of you that these achievements have been possible." 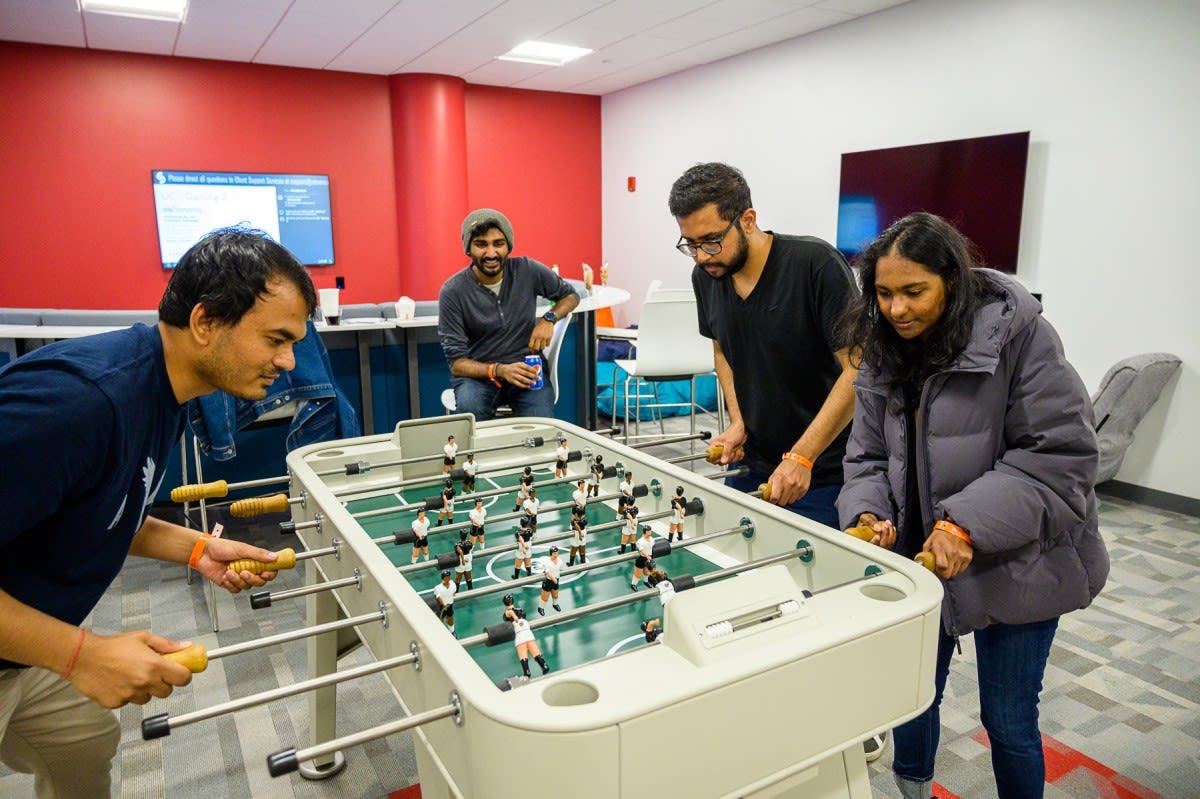